Capriole finalized 65% of constructions at LINX in NAC After its record-breaking accomplishments at the New Administrative Capital that took place in less than a year, Capriole Group is gearing up to kick-off the 2nd phase of NAC’s LINX project following Eid El Fitr Feast holiday.

Capriole Group achieved a whopping 65% out of total constructions in less than a year, as the company has started the finishing and final phases of constructions inclusive of electromechanics and façade works.

According to Chairman of Capriole Group Eng. Mohamed Mufeed, the group was eager to speed up constructions at the project, even before releasing news about introducing and selling units there. Further still, it took the lead carrying out the presidential directives even before the latter’s issuance, as it executed a considerable amount of  the constructions before the selling started. It actually started to publicize the project’s roll-out upon accomplishing more than 30% of constructions.

Capriole was keen on expediting construction in the face of the latest headwinds, notably  daily-based price hikes and fluctuations of raw materials, he said, underscoring the company’s keenness on finalizing and delivering the project ahead of schedule, before late 2023. 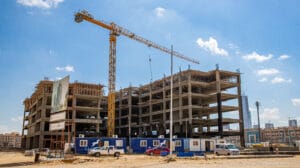